“Blackness. What does it really mean? When does it move from being a vulture of a particular culture to embodying it? And then how does one quote unquote ‘co-sign’ somebody’s embodiment and say ‘ok, we can check these things off the list, you did it right’?” These are the kinds of questions that ran through Kenyatta Forbes’ mind when she decided to create the card game ‘Trading Races’  – a party game for black American culture that provokes conversations about the contribution that various well known figures, who are illustrated on the cards, have made to the culture.

“There are so many different kinds of black that have to be accounted for, and I don’t think as society we allow the space for people to have their own personal blackness” said Kenyatta. The media often paints blacks as a group that falls into one narrow category: “If something happens on TV it’s ‘black people’ or ‘all black people do that’; but we’re so diverse, we have such a diverse background in terms of heritage and languages, and afro-latinos…you can go on and on and on, but that’s never really given space to explore and understand and share.”

Born and raised in Chicago – one of the most ethnically segregated cities in the U.S. – Kenyatta spent the early part of her childhood in an all-white community, and then moved into a more diverse neighborhood as a teenager. Her professional role as an educator (specializing in special needs teaching, diversity and inclusion work, as well as technology integration from kindergarten to 12th grade level) inspired the fun learning tool, as did her experiences as a student herself. “I’d always found it really difficult to have conversations that centered around race, specifically blackness” said Kenyatta. “During my time as a graduate student at UIC (University of Illinois at Chicago) when I was studying for my Masters of Fine Arts in Film, Video & Animation I had some really intense and uncomfortable situations in which professors unfortunately didn’t really have the tools or weren’t prepared to talk about race, specifically in my critiques. And because my work was very heavily girded in being a female or being a black woman in America, my work was very much centered around that concept.” Kenyatta described some of the experiences she had not only in grad school, but also conversations with those outside her race generally, as often being both emotionally and mentally traumatic. As a result “I wanted to create a scenario in which it didn’t have to be” she said. One that provides “some sort of way to have a dialogue or conversation that was constructive.” 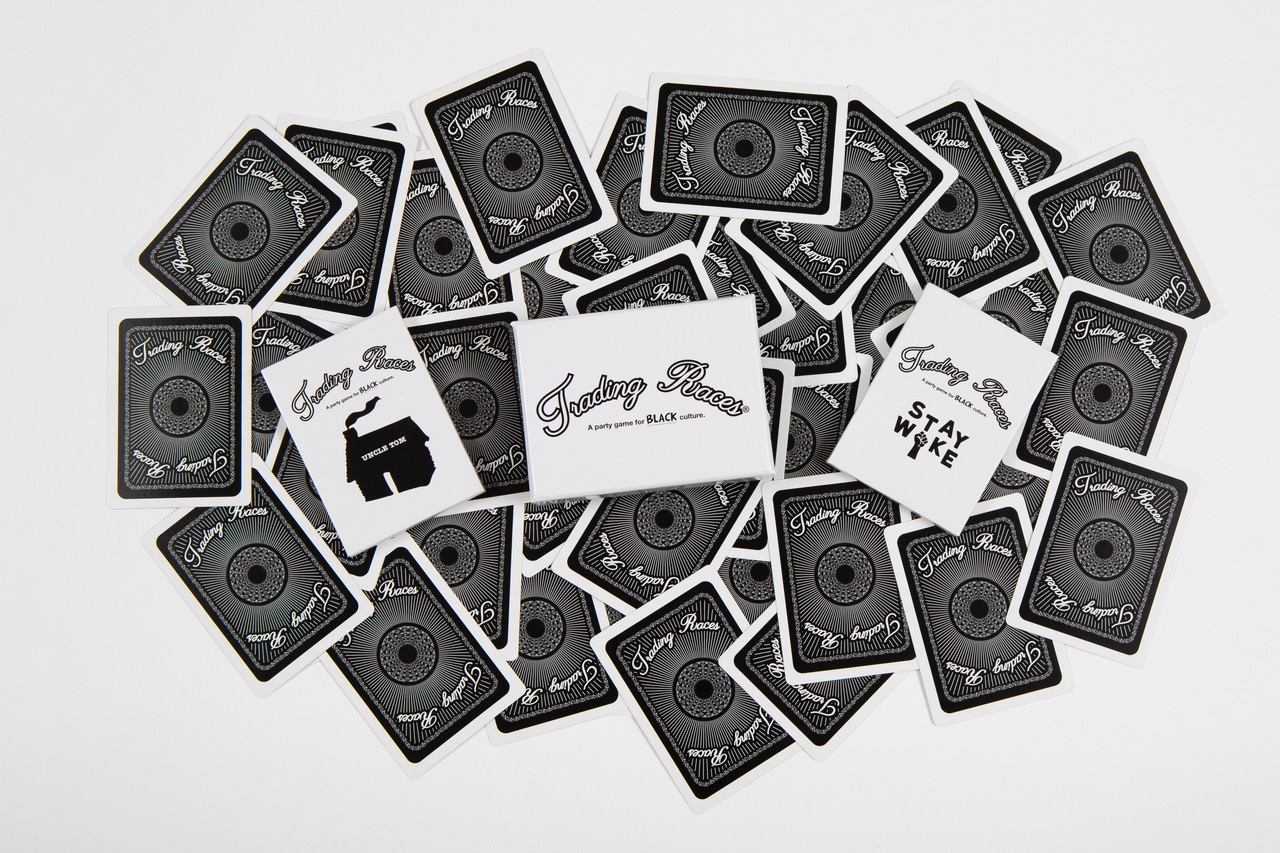 Trading Races cards, along with the ‘Uncle Tom’ and ‘Stay Woke’ expansion packs 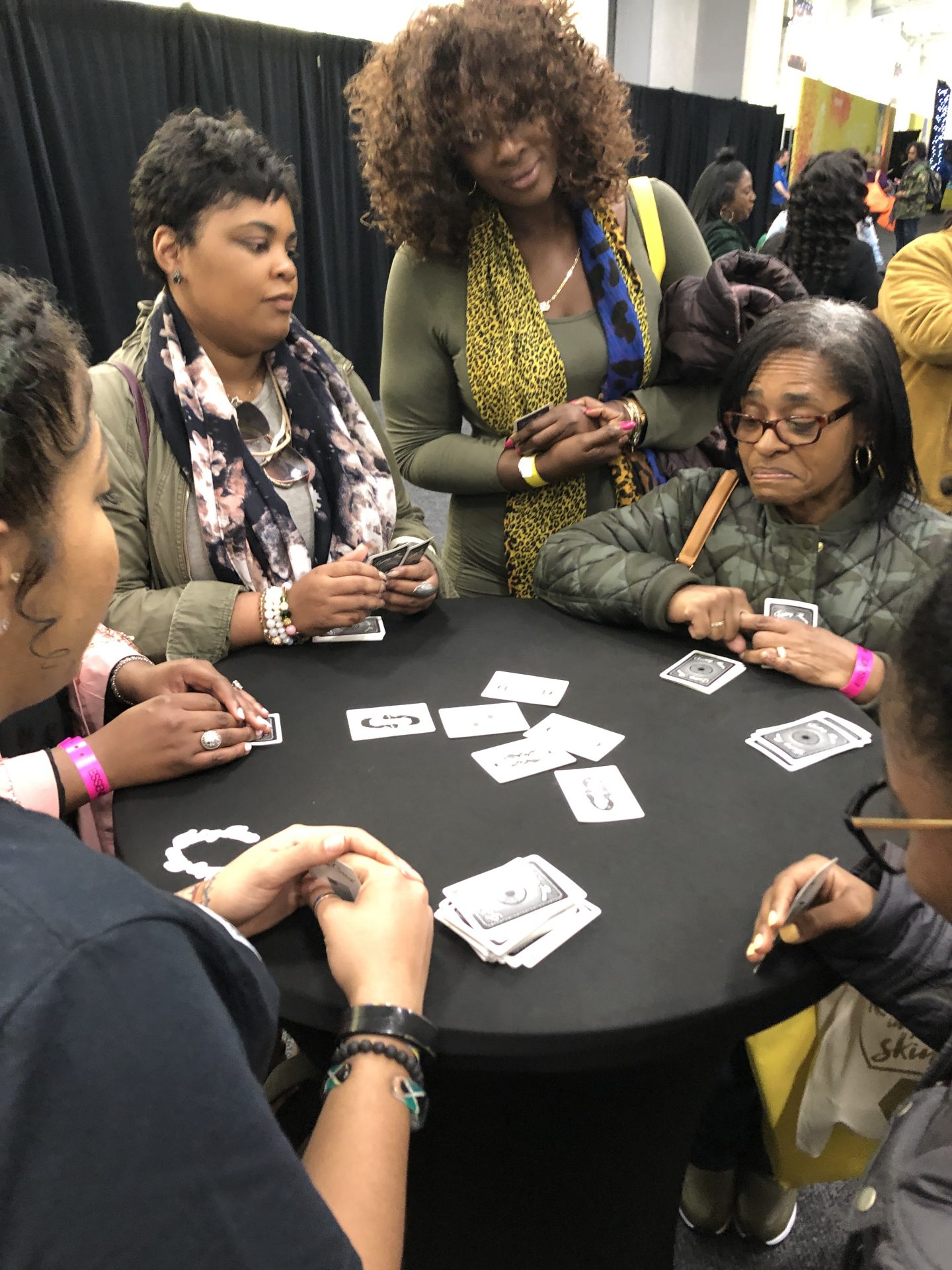 So how do you play Trading Races? “The game actually is really simple in terms of the rules, so even the tagline is ‘the rules are simple but the discussions won’t be’ ” said Kenyatta. “To begin with, five cards are randomly dealt out to each player, and then each player in turn will put down a card. The objective of the overall game is you want to ‘out-black’ your opponent but you want to play with some strategy, so if somebody throws out a card that is considered maybe a really high status or an extremely black card and you know you couldn’t beat it, then you’d play with strategy and put down something that’s quote unquote a low card of blackness. So players then put down all their cards and then they would argue about who they think is the blackest and why.” She said there is no definition of ‘blackness’ in the instructions “and that’s intentional just to kind of highlight how malleable and fluid blackness really is, and it comes in all kinds and, you know, it can’t really be put into a box.” As a result players “have to come to terms with that on their own, and from round to round that may shift based off of who is put on the table.”

Is there a winner? “The player who essentially gets the most books like you would in Spades, because that’s sort of my homage to Spades as well, is quote unquote the winner. But I do consider all the players who have played the game and played it in terms of creating or maintaining safe space and open dialogue and discussion…I think everybody wins.”

The deck of cards includes illustrated images of individuals ranging from Barack Obama to Frederick Douglas and Kanye West; and even those outside of the race such as Justin Beiber. “You put someone like Rachel Dolezal next to somebody like Omarosa…Rachel may be who you’d want to bring to the cookout” despite the fact that people view Rachel Dolezal as problematic in many ways , as Kenyatta pointed out. “So it changes based on who that person is compared to; and it may come down to their contribution, it may come down to their heritage, you know.”

Kenyatta said the feedback that she has received on the game, including from fellow educators, has been positive, and that it has lead to a lot of interesting conversations. “It’s supposed to be uncomfortable, but it’s inherently uncomfortable” she expressed. “In America race is a topic that nobody wants to address or talk about and it has been like that for a while. We want to assume that we’re post-racial, which we’re not…but I also believe that growth is what happens in uncomfortable spaces. So with that in mind it’s all about the way safe space is being created, community is being created, and essentially this is a game where there are no wrong answers, and there are no right answers at the same time.”

“I hate to say it, but a lot of non-black Americans have no reference point for many of the people who are in the deck…so this is a time for them to learn…and that’s a magical thing that happens because it kind of flips the system on its axis, where instead of you having predominantly white scholars or whoever in positions of power saying ‘this is what history is’ you have people of colour being the narrator of what history is, and that’s, to me, incredibly special.”

I asked Kenyatta about her thoughts on controversial topics such as white individuals painting their faces black (also known as ‘blackface’) for costume purposes and celebrities like Kim Kardashian wearing braids: “There is no excuse for black face” she expressed. “When little brown and black girls want to dress up as Cinderella for Halloween they don’t paint their face white. You can dress up as XY and Z without having to paint your face black or brown…that’s why I have a problem with blackface, because then it becomes a caricature of what you’re supposed to be representing.”

With regards to the Kardashians: “Paul Mooney said it the best: everybody wanna be a nigga but don’t nobody wanna be a nigga. And so to me that’s the embodiment of people who, to me, are culture vultures. There’s one thing about understanding and paying homage to a culture and really having a deep respect for a culture and there’s another thing to monetize a culture. And so when I look at a group like the Kardashians it is a business, and as controversial as someone like Rachel Dolezal is I can’t say she did it for monetary reasons. To be honest with you it has only been detrimental to her: she can’t find a job, you know what I mean? So when somebody is that committed, when it’s actually a detriment to their life I have to step back and say ‘what is this really? what is this for this person?’, and if you think about it that’s what the game does. It makes you kind of deconstruct and unearth a lot of the split second decisions that we make, especially with the culture that we’re in right now that’s ‘cancel culture’.”

Is the term ‘African American’ or ‘black’ preferable? “Well, it’s funny. I prefer ‘black’. I’m black. I’m blackity black black black” she said with humourous emphasis. “However I only find that the people who like to use ‘African American’ are non black people, or at least the ones I’ve been around” and she told me that she thinks its offensive when individuals outside her race shame her for using the term ‘black’ as if she’s being insensitive. “You don’t get to shame me as a person of colour, about what terminology I’m comfortable with using. It almost falls into the same argument as, like, ‘black people should not use the word nigga’. As an outsider you don’t get to police what I say in my community or how I identify or whatever – you don’t get to police that” she said. “Whatever you want to be called – if you want to be called black, African American, hell – if you want to be called coloured, that’s up to you” she said with a chuckle. Although she doesn’t use it often, the word ‘nigga’ is definitely in her vernacular she said, but she noted that “when I do say it it’s with company that I’m extremely close with, and it’s either a term of endearment at that point or its on a level of such comfortability and humour. It’s a deep level of understanding…there’s no deviation of disrespect, there’s none of that embedded in it.” 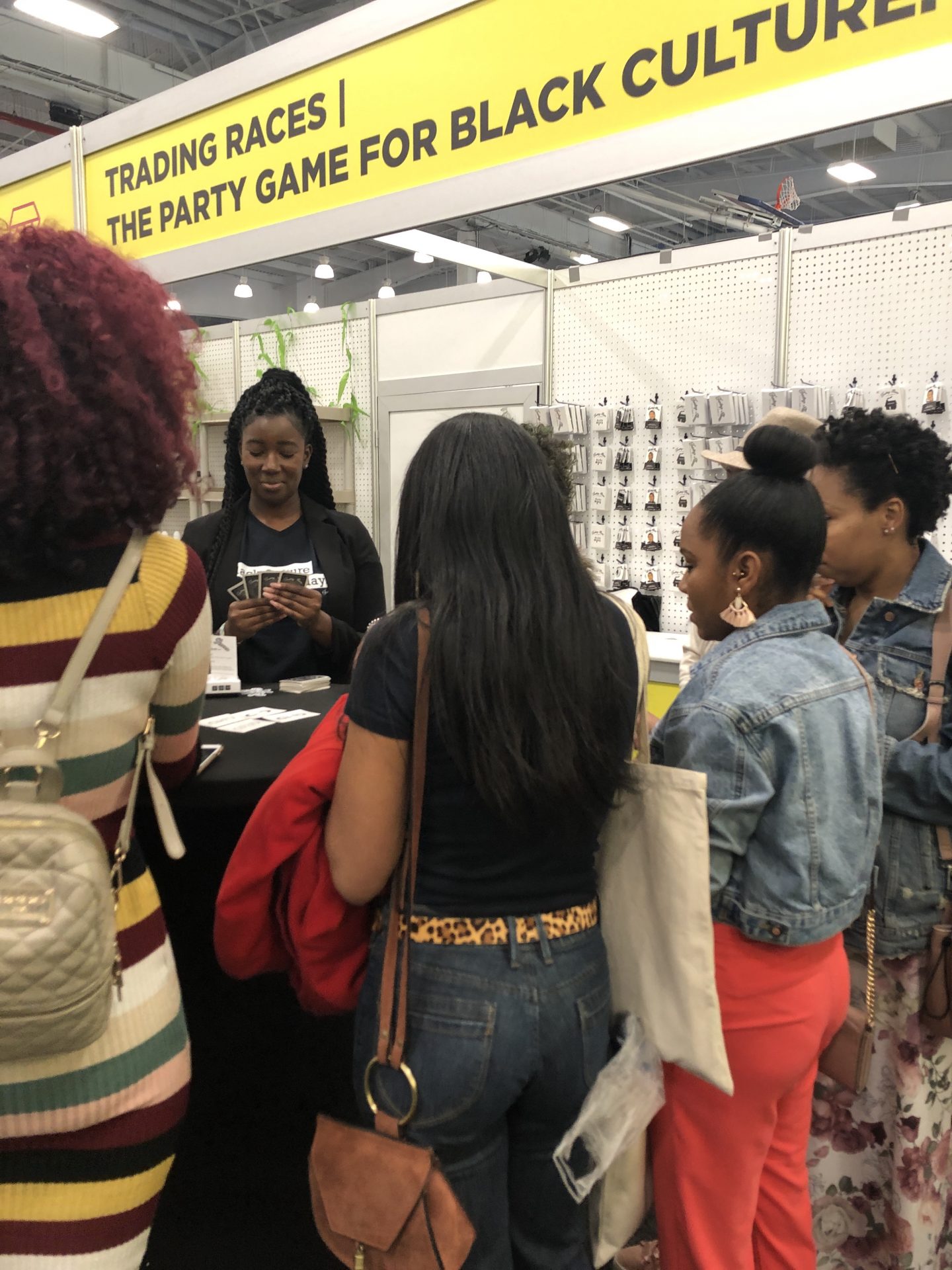 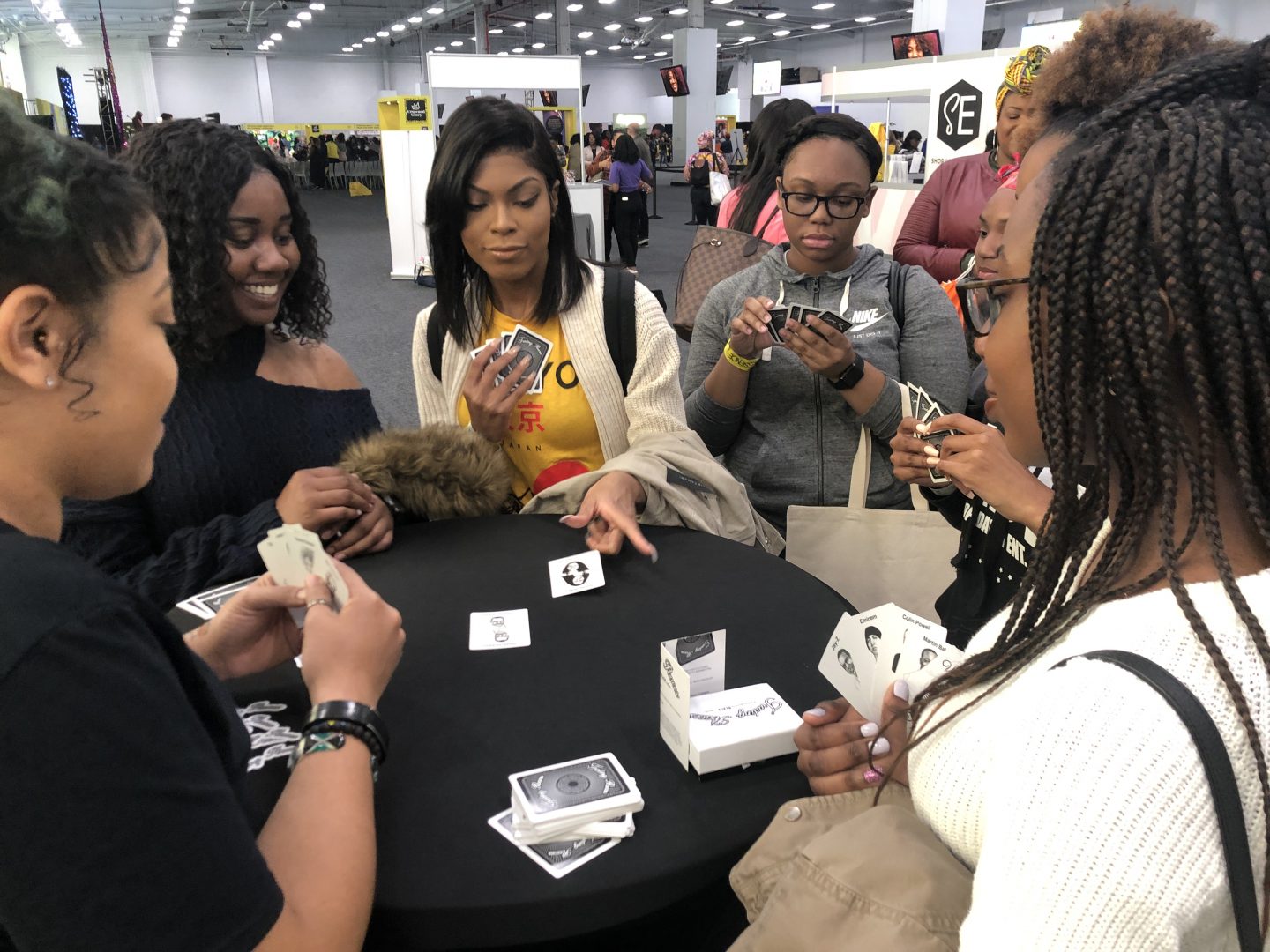 Trading Races has been featured in various media outlets such as Vice, Chicago Tribune and Essence, as well as at events including the Afropunk Festival and the Essence Beauty Carnival (where I was first introduced to the game and met Kenyatta in NYC last year). There are also expansion packs with different themes that can be added to the core deck of cards “in order to grow the base and keep the conversation fresh and growing” said Kenyatta. One, for example, is called the Uncle Tom expansion pack, which “I wanted to create when I found out that Trump was elected, and just seeing the flurry of chaos”; and others include the Chicago and Stay Woke expansion packs.

Additionally, Kenyatta and the rest of her creative team have been working on expanding the brand to include the international black diaspora as well as other races and countries. “If you notice on the box ‘black’ is underlined, which is kind of the hint that the intention was always to expand. I wanted to be inclusive but I couldn’t be immediately, but that is my intention and there have been some talks already with specific companies that are interested in sponsoring to create those.”

You may also be interested in checking out Trading Rappers (the predecessor to Trading Races), Kenyatta’s macrame business  and her Courageous Conversations project 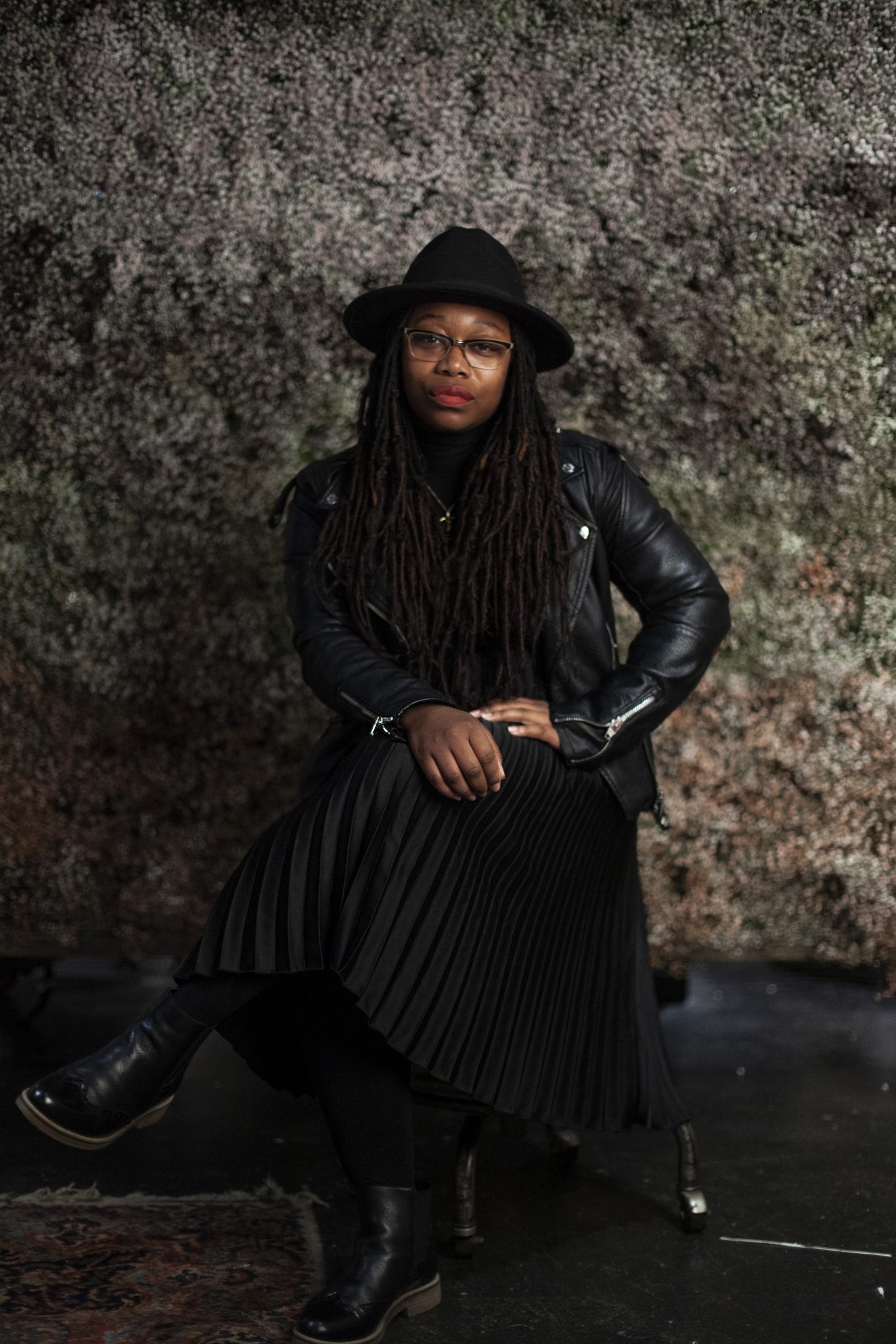 What Ingredients does Kenyatta think make the perfect smoothie?:

“Your base needs to be coconut milk and then, for me, I actually like a very basic smoothie. I use some ice, maybe a little bit of vanilla protein powder, vanilla extract and a little bit of cinnamon. So it kind of is a play on a traditional Mexican drink called a horchata, and that’s what I usually drink as a protein smoothie in the morning.”