Thankfully the rain had stopped as I walked briskly along the streets of central London with the largest and sturdiest of my umbrellas. It was a Friday evening in late August – Notting Hill Carnival weekend in fact – and I was heading to Holborn tube station to meet my friend Norman. I couldn’t wait to catch up and hear about his most recent accomplishment in the fashion world: making the final round of the 2018 Fashion 4 Africa modeling competition.

We greeted each other before venturing off towards the South Bank of the Thames searching for the perfect spot to chat, and after crossing Waterloo Bridge we settled for a lounge inside the National Theatre. The soft lighting created a relaxed atmosphere, and an interesting conversation was soon underway, although to our amusement we were interrupted by sporadic intercom announcements and alarms for the play ‘Julie’.

Since he began modeling in January of this year Norman has discovered a true passion for fashion, having recently signed with Exquisite Model Management. “I think there are a lot of stereotypes around models and the modeling industry: the idea that it’s all very superficial and that it’s just about makeup and cosmetics, but modeling is deep” he expressed, admitting that he too held those preconceptions before he started. He likened modeling to paintings like the Mona Lisa that have more to them than meets the eye, adding: “To showcase yourself to the world, whether you’re wearing clothes or shirtless, you have to have this ‘mad’ profound sense of self. You need to know who you are, aesthetically and internally.” The importance of not only showcasing clothes and understanding the vision of the designer, but also embodying his essence, energy and aura in the way that he walks and poses is something he is learning how to master from “some of the most intelligent people who model and really respect the craft.” In his opinion such expressions of oneself are essentially what defines beauty.

Born and raised in London with Ugandan heritage, 22-year old Norman believes winning Fashion 4 Africa would be an awesome opportunity to represent his culture to a wider audience and bridge cultural gaps internationally as well as within African communities. “As a first generation you’re kind of caught between a rock and a hard place. It doesn’t matter if you know your mother tongue or if you’re very afrocentric; you’re still recognized as ‘them’, as ‘west’” he said, having spent many holidays in Uganda working on community projects. “I think with fashion it’s not only an amazing way to connect with your culture but to also tell a story about it and to learn from it and grow with it.” Describing unique Africanisms Norman said “African culture is very loud, very vibrant. That’s why you see the designs are never one in the same. They’re always bright coloured, zigzaggy, with different fabrics, materials and all sorts going on.” Norman, whose favorite modern day hip-hop artists are J. Cole and Meek Mill, believes “fashion is the amazing epicenter of the creative scene.” He elaborated by referring to 90s “underground New York” hip-hop to illustrate how “the aesthetic of music blends into fashion”, as Timberland boots and construction shorts etc. “looking rough but still fresh” were often showcased.

Due to its universality Norman believes fashion is an incredibility powerful tool that can be utilized to initiate positive change, and he would like to capitalize on that, particularly if chosen as the Fashion 4 Africa winner. “As young people art has always been a way for us to explain what’s going on in the world, or at least convey it in a new and unique way” he said, and stressed that “afrocentrism is the thing right now.” He noted that both “African and Caribbean cultures are weaving their way more into mainstream media, and I think it’s important, as young people, that we jump on it.” He referred to the success of the Black Panther movie and the London-based Nigerian singer Wizkid to illustrate his point. “You walk around London and you’re seeing the head wraps and prints everywhere” he explained. “Even in music videos you’re seeing more African-style dance choreography and more African fashions.” 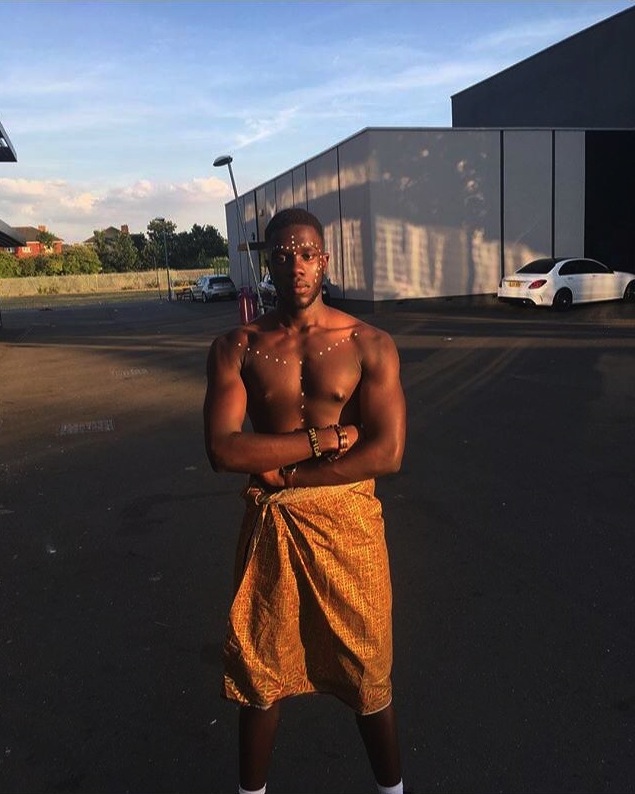 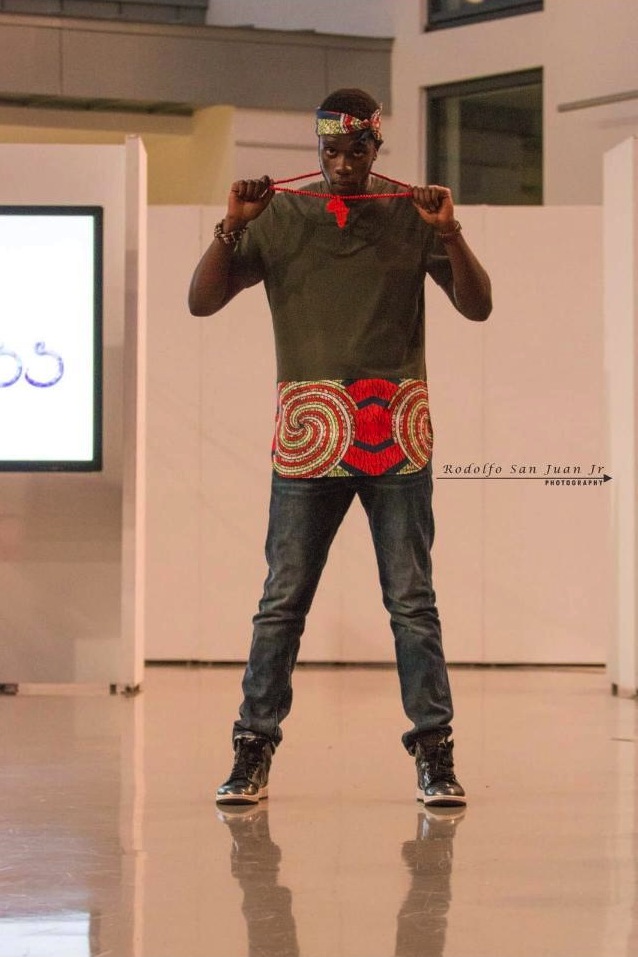 A 2017 graduate of the Honours Bachelor of Law program at Queen Mary University of London, Norman also has aspirations to become a barrister. He said modeling “has helped me a lot in my transition into the working world”, having recently completed a stint at a private investment firm. “The city is really rhythmic in the sense that you get off the train, you’re wearing a suit – which is to me like a school uniform, I don’t even like wearing suits anymore – and everything has extreme structure even down to the day itself.” However, in contrast, modeling has taught him to see the beauty in every day things and locations, as well as to have an innovative mindset: “I’m always looking out for potential shoot sites or just inspiration”, which “makes life that much more exciting every single day.” Furthermore, a strong sense of confidence and even resilience are qualities that he has gained from his experience modeling thus far: “behind the choreography is a lot of hard work, a lot of discipline and listening, and there’s often very little time to make mistakes. You have to be able to take criticism and keep it moving.”

Modeling does for Norman what the gym does for others, in terms of it being an outlet that provides a rejuvenating life balance. Although he enjoys working in the corporate world “we’re creative beings as well; we have autonomous thoughts and we think on a deeper level than animals and other beings, so its important that we tap into that.” He talked about the world-famous boxer Anthony Joshua who learns Spanish in his free time to stimulate his mind when he’s not in the ring, and Norman said modeling has a similar effect on him, because whilst he loves his legal pursuits “I’m never jaded by one particular thing.” Furthermore, “I feel like I can juggle these things and it not be a hindrance; that it would actually help me. It means that when I’m at work I’m more focused because I’ve actually had my ‘fun’, and I know when I leave work I’m zoning into another side of myself.” He said a mentor of his, Ms. Miranda Brawn, introduced him to the concept of having a portfolio career, and “the idea of having multiple disciplines, being skilled in different areas, and not pigeonholing yourself to just one thing.” Norman, who received the ‘Hogan Lovells Law 2017’ Miranda Brawn Diversity Leadership Scholarship, said “I think some of the best minds in history were creative minds, and they were ones that had portfolio careers as well, they were never just vested in one particular thing. They may’ve been specialists, but their mind was tapped into so many other things, so many other disciplines that allowed them to become great at what they did, because they drew links between many facets of life.” That’s why he strongly believes more focus should be placed on the arts in school, particularly the inner-city schools of London. 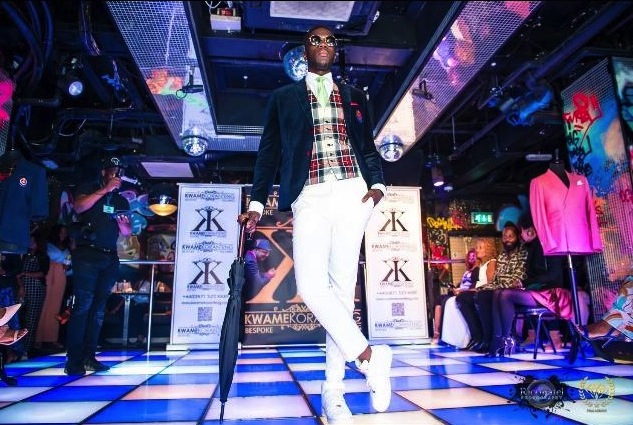 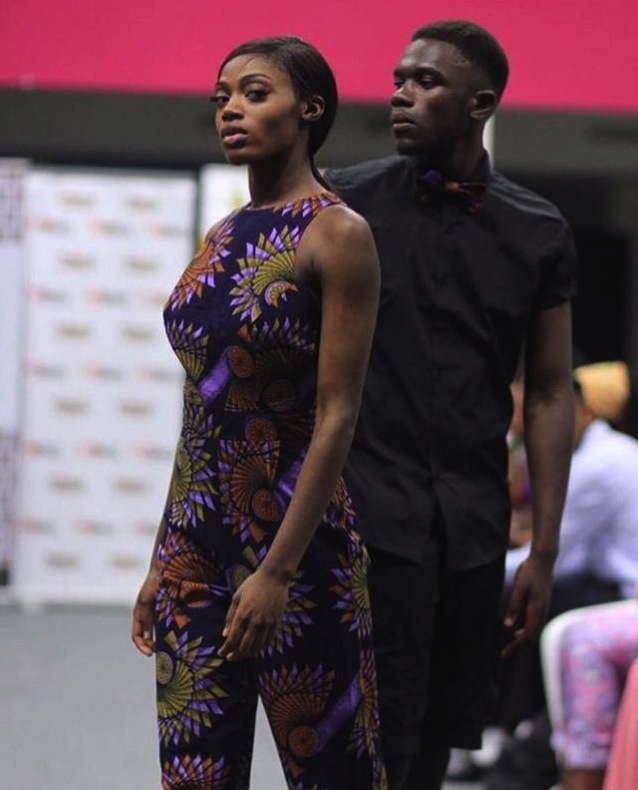 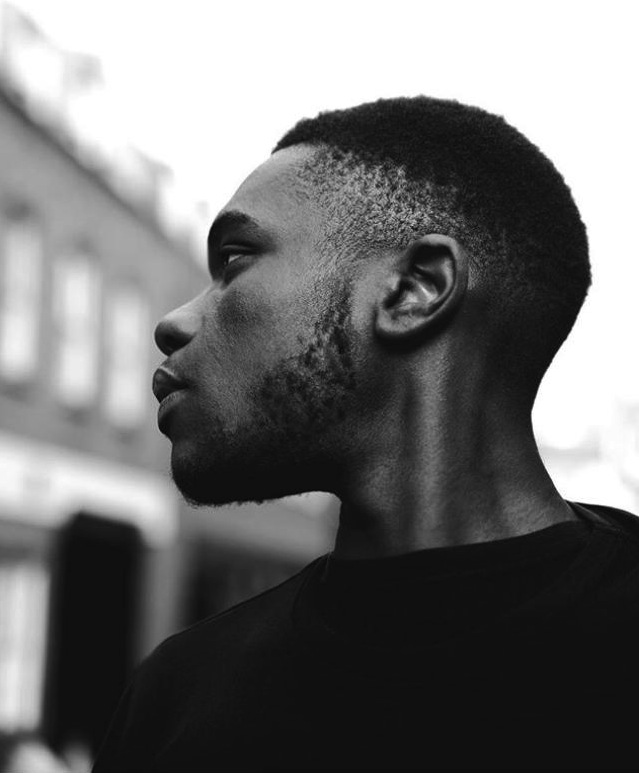 Norman feels blessed to have had many opportunities to showcase what he said has been described as his “wavy and very relaxed” walking style, in a series of runway shows so early in his modeling career. One of his goals is to model in Africa Fashion Week London in future, and following the advice of another mentor of his Reuben Joseph (Fashion 4 Africa competition choreographer), he is enjoying learning more about the industry by reading fashion magazines such as British GQ. “I’ve been reading it on the train and it’s just fascinating”, he said as he flicked through the pages of the September 2018 issue to point out an article on the new Men’s Artistic Director of Louis Vuitton Virgil Abloh. He said he was pleasantly surprised to see so many articles of substance in the publication, with topics ranging from politics to other matters of society.

There is no doubt that Norman, with his 6’ 2’’ swag and fun, gentlemanly personality, would make an excellent Fashion 4 Africa ambassador. Reflecting on his modeling journey he said “I want to give a shout out to Aji Ayorinde” – another mentor of his, who happens to be a fellow QMUL School of Law alumnus like Norman and I, as well as both the Founder and Creative Director of Made in Africa London Apparel (M.I.A). “He’s just legendary. He’s the guy that got me into fashion because he took me to my first runway show, connected me to my first photographer, said ‘I want you to model my brand’, and I just fell in love with it.”

All the best tonight Norman! I’m sure you’ll make Uganda and the rest of us proud!!

For more information about Norman and tonight’s competition, including how you can purchase tickets, please see the below flyer and visit the following links: 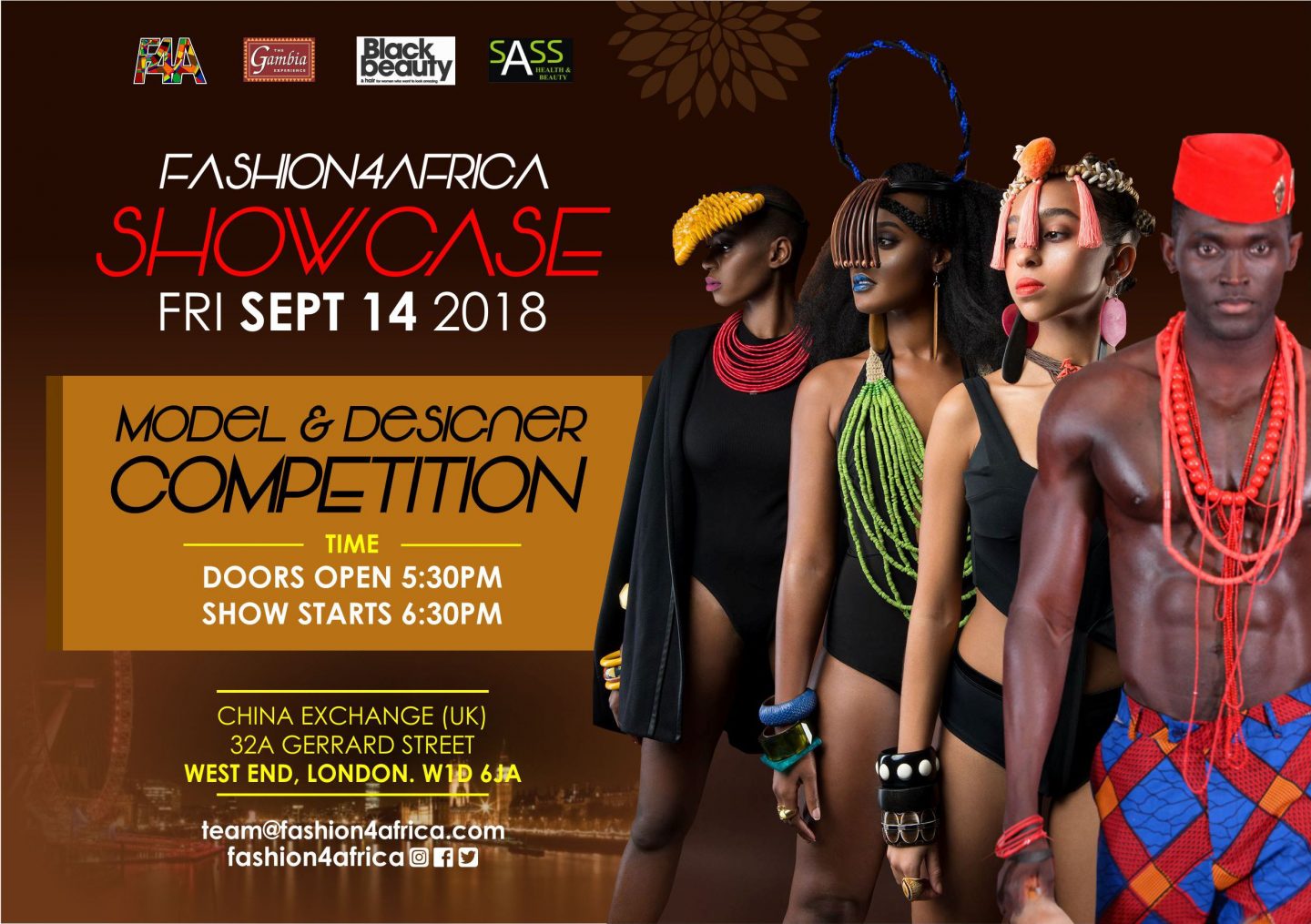 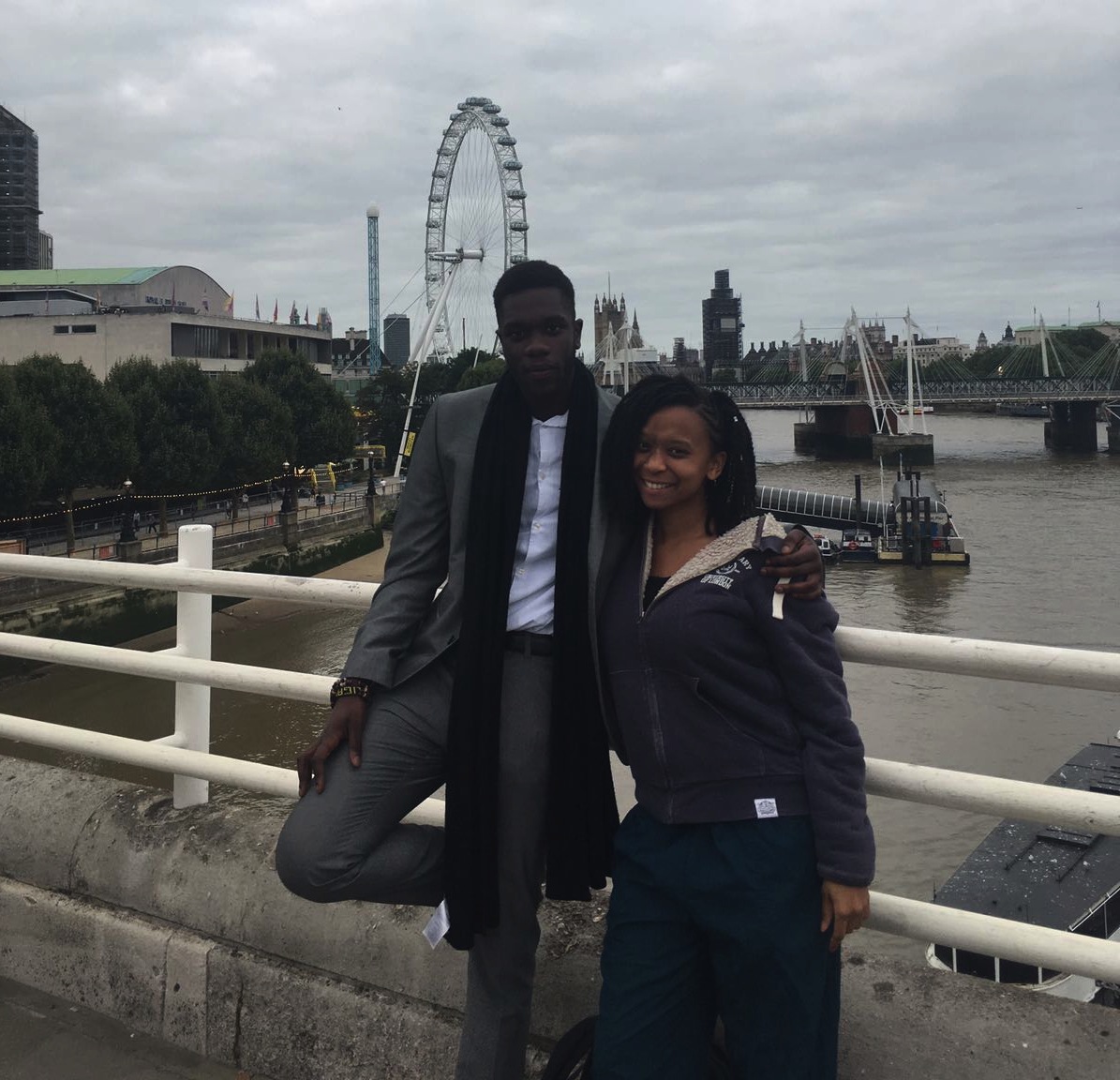