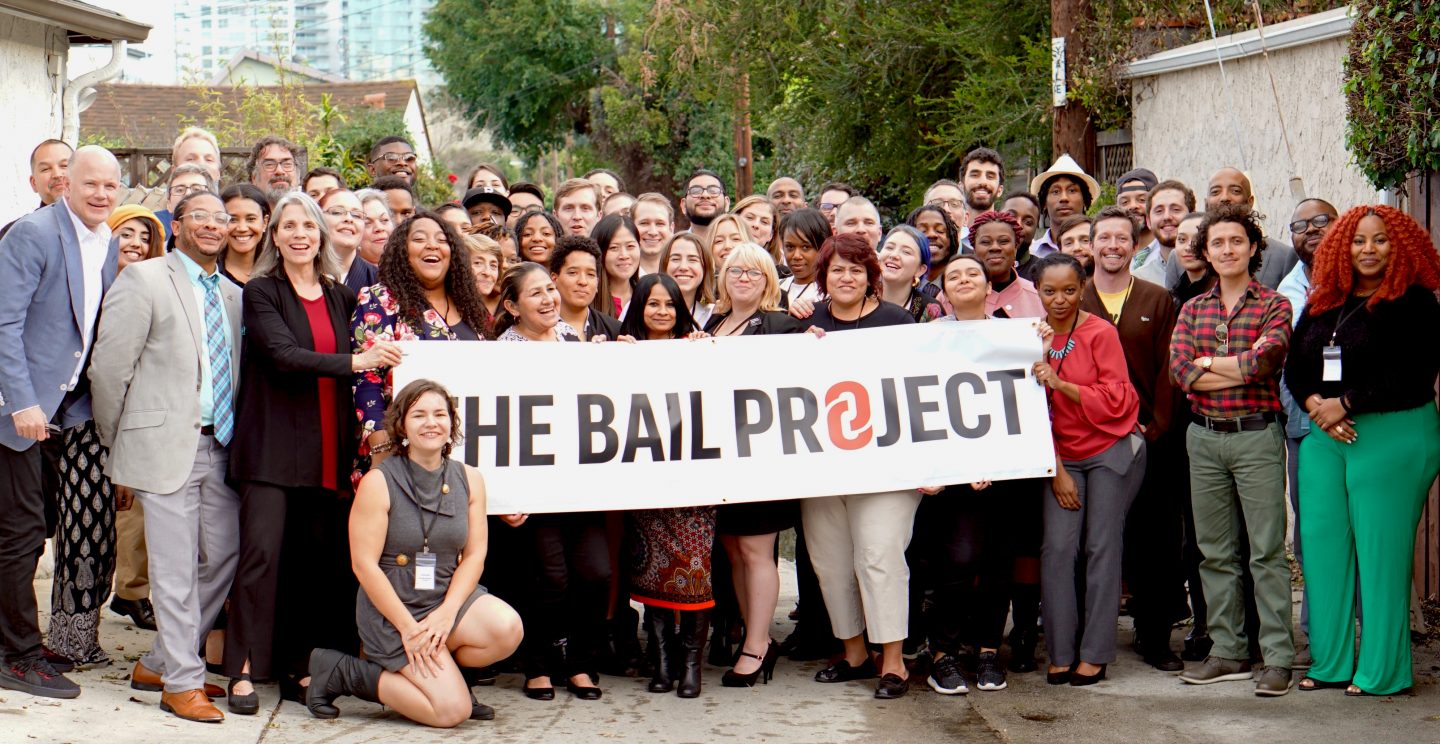 The Bail Project team. Members pictured gathered from across the United States.

Did you know that every night in the United States almost half a million people are locked up in jail cells before they’ve been convicted of anything; and its mostly because – contrary to their 8th Amendment right – they’re unable to afford cash bail? Those people are presumed innocent under the law, yet their low-income status leaves them at the mercy of their jailers; whilst rich and famous celebrities like Felicity Huffman (involved in college bribery scheme ) simply sign a signature bond without even having to step foot in a jail.

It is this unfair cash bail system that fuels mass incarceration in the US (costing taxpayers about $14 billion per year) and disproportionately affects people of color from marginalized, poverty-plagued communities. Writing from a Birmingham jail cell Martin Luther King Jr. once said: “we know through painful experience that freedom is never voluntarily given by the oppressor, it must be demanded by the oppressed”, and The Bail Project is empowering individuals across the country to do just that.

Modeled after her successful Bronx Freedom Fund, veteran public defense attorney Robin Steinberg created The Bail Project – a non-profit organization, with the support of The Audacious Project at TED in 2018. The organization’s mission is to provide bail assistance on an unprecedented scale nationwide and create long-lasting reforms with the support of community partners, thereby combating mass incarceration at the front end of the system and restoring the presumption of innocence. The project utilizes a National Revolving Bail Fund, which recycles money received from various donors and uses it to pay bail two to three times per year.

“A third of sexual victimization by jail staff happens in the first three days in jail and almost half of all jail deaths, including suicides, happen in that first week” said Robin in her 2018 Ted Talk titled ‘What if we ended the injustice of bail?’ . Even a brief period in jail and the tremendous stress and trauma that comes along with it can actually lead one to plead guilty to a crime in desperation so that they can return home, despite the fact that they may in fact be innocent (a situation that the Director of Partnerships for The Bail Project Shelton McElroy once found himself in ). This in turn means they acquire an unnecessary criminal record and the negative ramifications that come along with that; however that option may have still been far more tolerable than prolonging their time behind bars before trial and risking job losses, eviction notices, broken families and countless other life-changing problems. 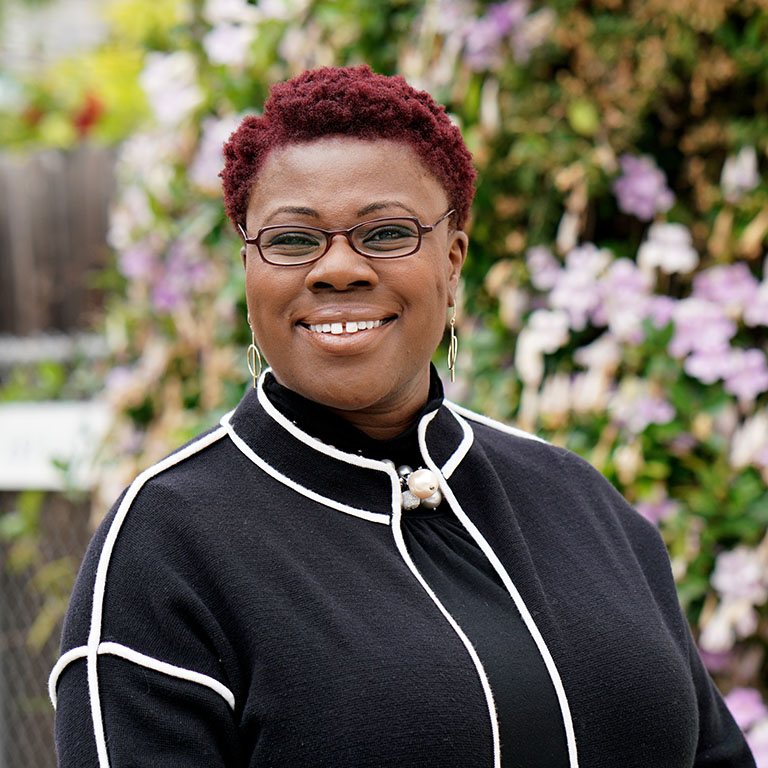 Yemi Adegbonmire (Ah-day-bo-marry) is General Counsel for The Bail Project. She said “it has been quite sobering for me to work alongside people who at another point in their lives were taken away from society for 20 years or for 10 years or 5 years; and it makes what we’re doing with the criminal legal system very, very real.” The colleagues she is referring to are advocates known as “Bail Disruptors” – many of whom have experienced the harsh realities of the criminal justice system first hand. “I am humbled by the fact that people who have been system impacted and have been in facilities like the facilities that our bail disruptors go into, take on a job where they have to re-enter facilities like that. I find that an incredible testimony to their character and their healing, and the importance of the way they value and see this work. So, in the face of and being hip to hip with courage like that…humbling would be too trite a phrase…it’s just powerful, powerful.”

One such “Bail Disruptor” is Ramel Edwards, who worked at The Bronx Freedom Fund, the pilot program and proof of concept that led to The Bail Project. In 2014 he was detained pretrial on the floating jail barge known as The Boat or the Vernon C. Bain Correctional Center (an overflow space for the Rikers Island jail complex), after a judge set a bail amount that he could not afford. He was bailed out by The Bronx Freedom Fund and eventually began working with them to provide bail assistance to others in a similar situation. His moving story can be viewed on Vimeo . In January 2020, New York State ended the use of cash bail for the vast majority of cases.

In addition to providing the funds necessary to cover the cost of bail, The Bail Project assists clients throughout the period leading up to their court date. “The model is Community Release With Support, so the intervention is not just us paying the bail – that’s our direct service, but we want clients to be supported throughout the process; and so while they’re waiting for adjudication, if we know that someone is experiencing some level of homelessness we may try to figure out ‘can we connect you with an organization that can help you with that’?” said Yemi. “Because the big thing is, we want to make sure we can stay in contact. So the more stable that person is, it helps them get back to court, so that’s why we want to make sure the person is supported throughout the process.”

In fact, through the work of the organization it has been proven that not only is it unreasonable for cash bail to be unaffordable, but it is not actually even needed at all to ensure that clients show up to court (which is its purpose). Effective reminders and logistical assistance is generally all that is required. 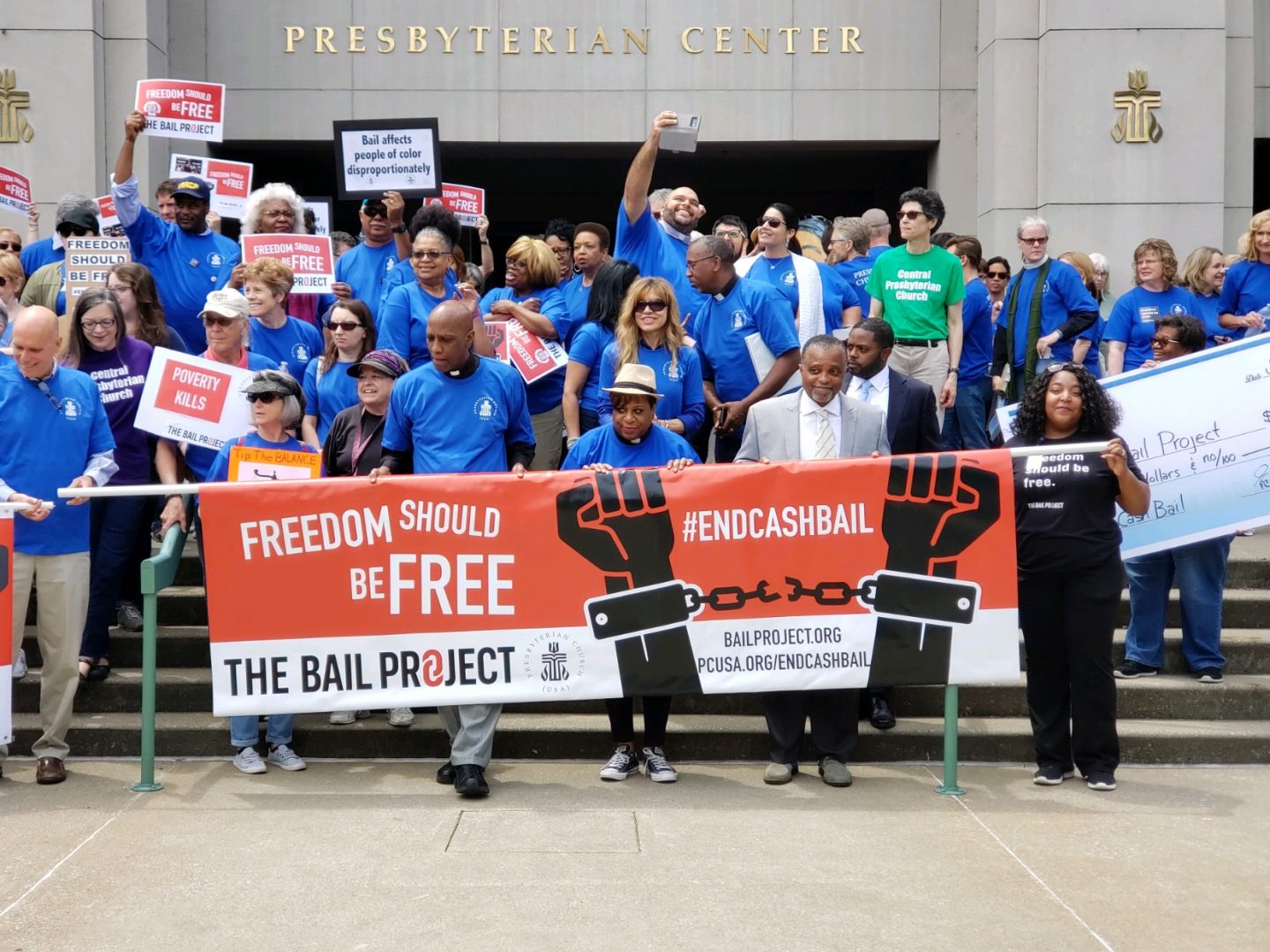 The Bail Project team in Louisville Kentucky are seen marching alongside members of the Presbyterian community and the Louisville community at large, to show their support for bail reform and for those criminalized by the pretrial system.

When asked about the most challenging aspect of her job Yemi said it is “that we can’t just be everywhere instantly. Each jurisdiction is so different that there is a lot of a lift to understand how bail works in each jurisdiction. It’s such an elegant and clean and clear model that I just wish we could wake up one day and be everywhere, because the faster we do that the faster we’ll prove our model and that means that fewer people will be harmed.” She also said that whilst clients are often referred to them by the public defenders office in each jurisdiction “there are times when we are not in a position to support a client’s needs.” However “we don’t want a client to be assigned to The Bail Project. We don’t want to be institutionalized in that way; we want it to be something that works for both parties.”

The Bail Project presently has branches in 10 states and a number of celebrities support the organization in various capacities, such as Sir Richard Branson, John Legend and Danny Glover (Advisory Board members), Michael E. Novogratz (Governing Board Chair), and Kim Kardashian West who recently encouraged her Instagram followers to donate to the cause .

Anyone interested can get involved also by “posting about it, tweeting about it, following us, paying attention to the things that we’re focusing on, and also talking to people about the humanity of folks, and explaining to them that this is a way that we keep our community strong; this is a way that we restore the presumption of innocence in the country. And then as we roll out our policy platforms in their jurisdiction, as we have events, as we push bills to go forward and things like that: having their support, or if they would write in to their legislator to support those efforts. As we start doing that work that will be important too” said Yemi.

If you’d like to play your part in fighting mass incarceration and restoring the presumption of innocence in America consider donating via the following webpage: https://secure.givelively.org/donate/the-bail-project where 100% of donations are used to bring people home; purchasing a ‘Freedom Should Be Free’ t-shirt; and spreading the word far and wide. As the great Martin Luther King Jr. once said: “our lives begin to end the day we become silent about things that matter”, and “true peace is not merely the absence of tension; it is the presence of justice.” 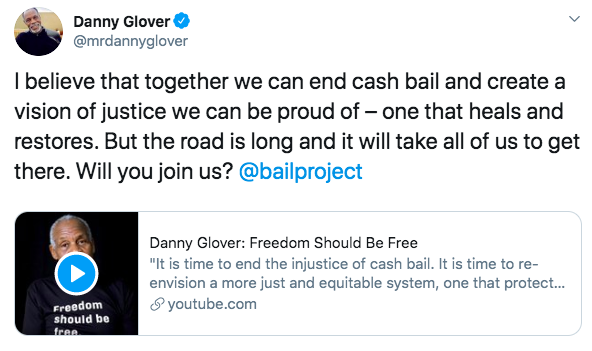 Tweet by American actor, film director and political activist Danny Glover, who is an Advisory Board member for The Bail Project.

For more information about The Bail Project visit https://bailproject.org/  and watch the following explainer video by Danny Glover: https://www.youtube.com/watch?v=LrCf5CqMhCg&t=1s and talk given by Robin Steinburgh at a Tedx event: https://www.ted.com/talks/robin_steinberg_breaking_the_cycle_of_injustice_one_bail_at_a_time

INTERESTING FACT: Did you know there is a difference between a “jail” and a “prison”? In most US states jails are short-term facilities operated by local authorities, whereas prisons are long-term facilities operated by the state or federal government. As Yemi explained, “there are two different types of housing facilities. There’s jail where people are generally housed pre-trial, and then post-trial you would typically go to a prison.”